The Boston Terrier breed was created from the breeding of the White English Terrier and British Bulldogs back in the 1860s by an American by the name of Robert C. Hooper. Hooper, who lived in Boston, raised his first dog, “Judge” and the pups he sired and called them American Bull Terriers. The breed’s name was later changed to the Boston Terrier to give credit back to Robert Hooper and the breed’s origin. 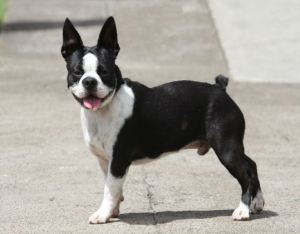 Boston Terriers are wonderful companion dogs. They are often called the “American Gentleman” due to their tuxedo-wearing appearance and also due to their friendly disposition. They are avid lickers and will lick anyone and everything if given a chance. They are excellent with people and other dogs as long as they are properly socialized when young. These sturdy little dogs are full of energy and need an outlet for that energy. For this reason, even though they are considered a small breed, they are not ideal for apartment living, unless they are exercised regularly. Boston terriers are a wonderful little dog that acts like a much bigger dog. They are often owned by people who say that they would never have had a small breed dog but since these dogs are spunky, athletic and super playful they don’t seem like a small breed at all.

Being terriers, Boston’s are natural predators and will chase anything that moves, unless they have been raised knowing which animals are family members (i.e. the family cat, guinea pig, etc.) because otherwise, anything else that runs will be fair game. They are well-known for both their intelligence and their stubbornness. As with all dogs, they need early training to avoid issues with these, and other, personality traits.

There are several different classes of Boston Terriers. The smallest weighs under 15 lbs, the middle class weighs between 15 – 20 lbs and the largest weighs between 20 and 25 lbs. Typically their height does not exceed 17 inches at the shoulder blades (withers). Their short hair coat is very easy to maintain, with no brushing required. An occasional bath every 3-4 weeks, is all that is usually needed.

Purebred dogs are prone to various health issues and the Boston Terrier is no exception. The number one health problem faced by Boston Terriers is allergies. They suffer from both gastrointestinal sensitivities and outward signs of allergic response such as itching, skin irritation and face rubbing. Often allergy testing needs to be performed to isolate which allergens are bothersome to the dog, so that a suitable food can be found and allergens in the environment can be minimized. They are also particularly prone to eye issues as their eyes protrude due to their pushed in faces. Cataracts, ulcers and injuries while running through bushes are just to name a few. Unfortunately, they are also prone to heart issues.

Due to their pushed-in faces, they are prone to over-heating in the summer as they can’t regulate their body temperature as well as other, longer-nosed breeds. They cannot be exercised on hot days, as this can be deadly. Boston terriers, being a very short-coated dog, are also not designed to be outside in the winter . They often spend the winter months lying in the sun on the living room floor or spread out over a favourite heating vent trying to stay warm. Owners of Boston’s often joke that they have a spring and fall dog due to these temperature constraints. 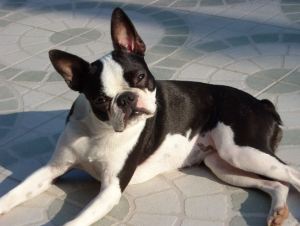 On a humorous final note, like Pugs, Bulldogs and French Bulldogs, Bostons make a range of vocalizations that most people would never know a dog could make. A bizarre combination of chirps, squawks, high-pitched trills, squeaks, snorts, grunts and snoring in addition to barking, can be heard on a daily basis. To new owners or a person unfamiliar with these pushed-in faced breeds, these sounds can sometimes be very disconcerting but long-time owners find these sounds endearing for sure. 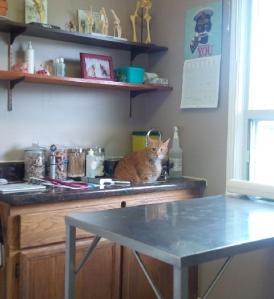 Let’s face it, as much as we absolutely love to see your furry family members, they may not be as excited to see us…

While your trip to the vet is typically a care-free and easy affair, an animal facing the same can have an entirely different experience. For most pets, their only encounters at a vet’s office is when they are not feeling well, or they are going to be poked and prodded by needles, thermometers and who knows what else! They walk into a scary room full of other animals and strange smells, then they are ushered into a smaller room and put up on a cold table, all the while wondering – What the heck is going on? But don’t worry, it doesn’t have to be like this!

Here are a few simple steps that will help your pet understand that a trip to the vet’s office can be (almost) as fun as a trip to the park:

1. Get your pet used to being touched. And we don’t mean daily scratches and rubs, we mean touch all of the areas that a veterinarian would during a physical exam – feel along the abdomen, look in their eyes and ears, trim their nails (or mimic the motion of raising their paws), have them lie on their side and, most importantly, tell them how good they are being when they are nice and calm!

2. Allow your pet the option of getting to know the clinic – waiting room and staff alike. You are always welcome to bring your pet in at any time to say hi! Just let us know you’re here for a quick visit. We can weigh your pet, give them lots of praise and even a treat (okay, lots of treats). Suddenly they will think that going to the vet’s office isn’t such a bad idea!

3. Arrive about 5-10 minutes before your scheduled appointment. This will allow you to take your dog for a short walk in case they need a chance to eliminate, or your cat some time to adjust going from car to waiting room to doctor. We all know how stressful it can be when you are quickly shuffled from place to place.

4. Keep your pet close to you while you are waiting to see the doctor. This is an unfamiliar place, your pet will be all the more comfortable if you are close to them, giving them love and talking to them. You can even bring a favourite toy or special treat to keep them distracted.

Follow these four easy steps to ensure that your pet’s next visit to see us is a pleasant and relaxed one. Remember, your pet looks to you for direction, so as long as you are there to support them in any new or uncomfortable experience, it should be a breeze! If you have any further concerns about bringing your furry family member to our clinic, please don’t hesitate to contact us. We always have a few more tips and tricks up our sleeves! 😉